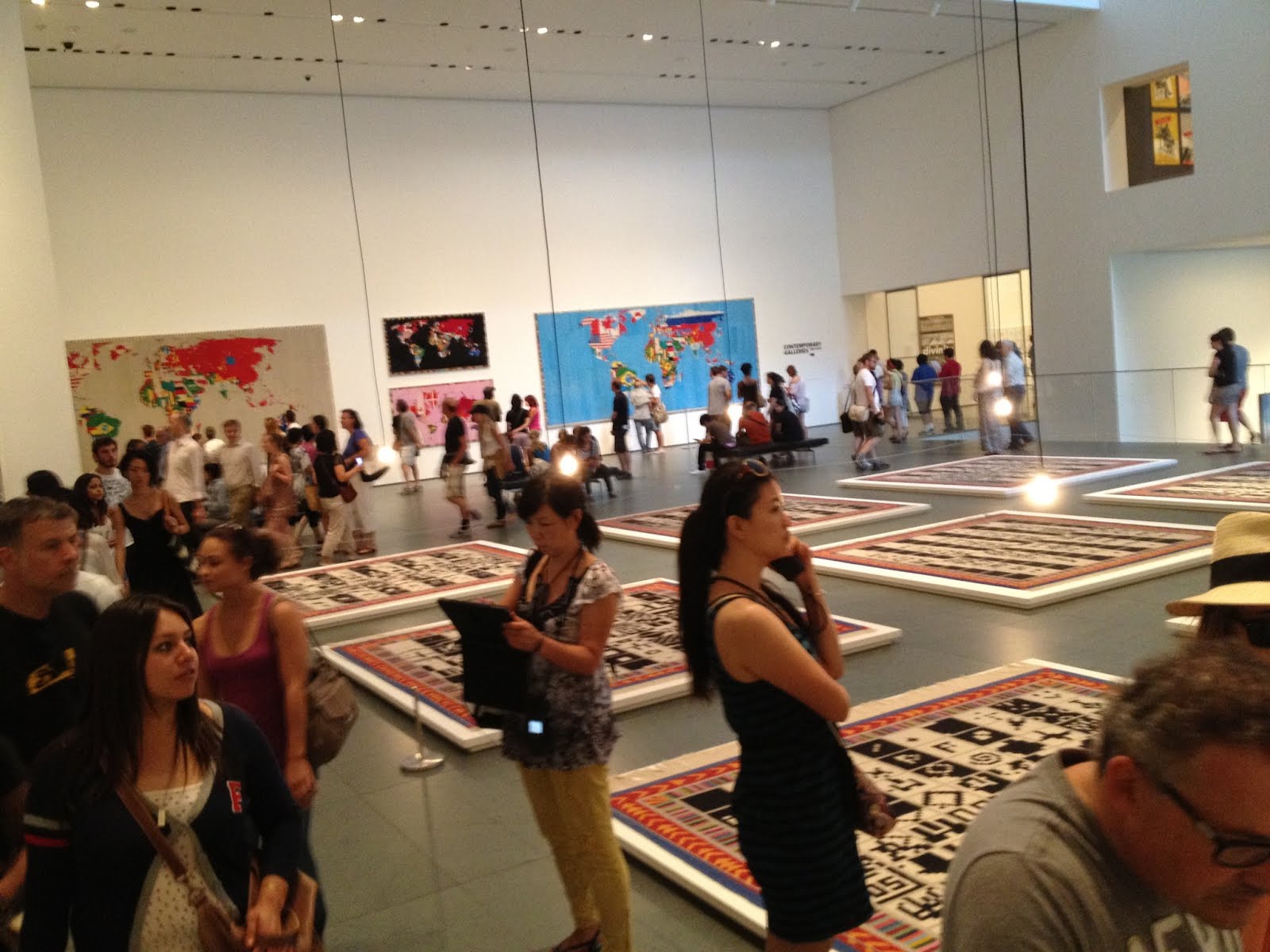 Alighiero Boetti was not a name I knew well at all.  It was a name I knew just enough to know it.  It often seems like professional suicide in this business to admit you don’t know something, but I didn’t know anything about him.  There I said it.  Anyone remember that scene in Almost Famous where they think they are going to die on the little prop plane and confess all their misdeeds.  Well, like that.  I saw the Alighiero Boetti show at MoMA (open until Oct 1!) and crossed him off my list of ignorance (subheading: artists).

The fact is I spent my first walk through of the show comparing Boetti to many of his global contemporaries.  I began to think of Boetti as a Zelig-like figure, digesting many isms and dispersing his own conceptual objects.  These early sculpture had some Duchamp, Beuys, Judd, and LeWitt in them.  The walk from the front of the exhibition to the back was difficult, in that I passed through disparate periods that dealt with as many subjects as there were square feet to display them.  Entire college semiotics courses are built to “unpack” the things Boetti put on paper, wood, canvas and board with very little symbol or text.  These hieroglyphs and ambidextrous scrawlings, turned over on themselves, were born a mystery.  We aren’t meant to decypher it all, but certainly to work at it some.  As I walked from back to front, taking everything in again, having seen the Insicuro Noncurante, an 82 image print portfolio that serves as the artists take on Duchamp’s valise-sized retrospective, I took it all in anew.  The things I saw bounced back like a reflection, mirrored and visible in stereogram-like oddness, tricking my eyes and brain. 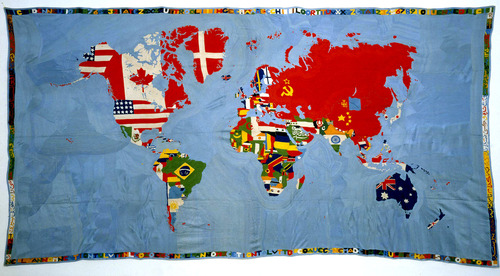 The maps that are hanging in the atrium and the woven text pieces are beautiful.  They are great conceptual relics that make me think of LeWitt again.  Yet with Boetti, there was a far greater desire for input from collaborators.  They are noteworthy, but a little empty without the rest of this show or significant explanation of their history.

This one piece, the Hourglass, Hinge and Vice Versa, greatly affected me.  In MoMA’s online exhibition site, Clessidra, cerniera e vice versa, 1981 is described as follows: 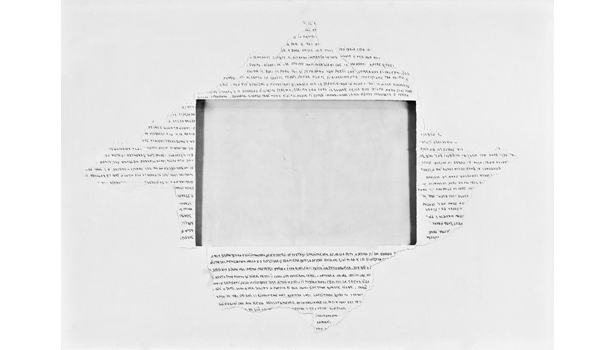 “Boetti was right-handed; he used his left hand to transcribe these thoughts about time and its passage because it forced him to write slowly and therefore be more conscious of his thought process. He flipped the page over and tore four triangles outward from the center, folding the flaps over to expose the text. This is one of Boetti’s most private works and one he felt brought together many of his ideas about binary systems—including order and disorder, chance and reason, and improvisation and structure. Of it he said, “I don’t believe I could do anything more concentrated, denser, more diversified, more complete, because there’s calligraphy, text, poetry, this visual fact of the opening out . . . the being ripped into many pieces and finding unity in the negative, in the void.”

This torn piece of paper is the kind of quiet thing that sneaks up on you and moves into your dreams.  It is an immature work and I don’t mean that as a put down.  A diary page, ruptured, flipped and mostly hidden from view.  It says nearly everything that can be said about who Boetti was as an artist.

Finally, this is not intended to be a review of how I review a show, but it is.  I hate to make up my mind in advance and I was lucky to be able to see it all fresh.  Boetti surprised me.  He surprised me with how unsurprising his imagery was, but how much art lived, worked and played there.

————-
Next week will be a limited Atlas with only article recommendations and no review.
————-

One Response to “Ninth – Boetti”