The Whitney stages riveting, maddening, often awful exhibitions in Breuer’s upended gray steps.  In the last few years I have been left saddened by shows that I hoped to find illuminating.  I was so looking forward to seeing Glenn Ligon and left thinking I had been trapped in an oversized art fair booth.  The Biennial is always the same way.  Unsellable and/or unlovable art by someone that has been at it for 50 years hangs beside someone whose art school degree is still wet.  Sometimes the quality is there, and sometimes it is not.  It is a valuable exercise so they wedge this art in where they can, hoping to make a show of it.

I went to the lame duck Whitney.  It’s sitting there waiting to become the Met Annex after the Whitney “Highline“ edition becomes a reality.  Yayoi Kusama is there and still pulling in the crowds.  I enjoyed that show enough to recommend it.  The early works on paper fill me with longing to see more Klee and Kandinsky.  The sculpture makes me want to head over to MoMA for Brancusi and Bourgeois.  The painting is joyful and hooray for that.  The installation is a little sad, a lot bland and definitely overstuffed.

I first encountered Sharon Hayes at the ‘Ecstatic Resistance’ exhibition organized by Emily Roysdon at the X Initiative/DIA Space/Gallery building.  Some version of Yard (Sign) was on exhibition there and initially I didn’t pay any attention.  I looked around it for other work, then over it and through it.  When I slowed down and began to read them and see them as an intervention, I was able to focus.  I approached it as a muted mob, silently chanting and never to be heard.  Then last week I encountered Sharon Hayes as part of the Ecstatic Alphabet/Heaps of Language show at MoMA.  Knee height pink prints held longing messages to an unnamed lover or love interest.  It lit a fire under my ass and sent me to The Whitney.

Sharon Hayes at the Whitney is not so much a show as it is another intervention.  It feels like a temporary stage for performance to live.  The show contains plywood risers, rooms and hallways, a room concealing curtain with text and a few pedestals (just boxes for stuff to be on) designed in collaboration with the artist Andrea Geyer.  Paint those steps gray instead of black and its Breuers building flipped over! The video projections range from DIY to incredibly polished.  Yard (Sign) is here again, newly expanded and raised up a few steps, segregating the viewer and moving the signs into direct sight lines.  I liked the presentation better at floor height when the signs were in their natural habitat.

To get it out of the way, I didn’t like the flat work.  The flyers seemed like an afterthought in the installation, and so did the record covers.  This may have been because I had just seen Mark Flood’s show at Luxembourg & Dayan and by comparison these seem flat in every sense.  The video, audio and performance ranged from good to entrancing.  I took a lot of time with two pieces within the show.  Symbionese Liberation Army (SLA) Screeds #13, 16, 20 & 29, 2003 was mesmerizing.  Hayes reads from the transcripts of Patty Hearst’s taped declarations during her kidnapping.  The audience (unseen) corrects Hayes with any divergence from the transcript.  They speak in unison and Hayes backs up to the error and begins again.  The effect of this is an anxious comic performance that relies more on the proctors then it does on the performer.  If I were an actor, I imagine this would constitute a true nightmare. 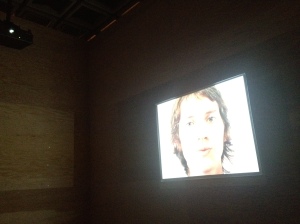 A turntable and headphones, sitting dormant waiting for you to engage it, in An Ear to the Sounds of Our History “uses samples from Hayes’s collection of spoken-word records”.  I sat listening to these records in snippets hearing out of place lectures and histories.  The blankish room and the record’s verbal drone made me think of being a willing captive, like Hearst.  The more I saw of the show the more I thought that An Ear was pure in the way that Yard (Sign) is pure.  These words are presented again, not Hayes or ours, but for us to see and hear.  We choose to absorb them anew, though they are not new at all.

The other film, video and audio work all intrigued me, but I was wrung out.  I had no energy left for Hayes’ new/old thoughts in my head.  I was happy to have the Talking Heads thumping in my ears, leading me back to the subway.  “They call them buildings to help them along”.