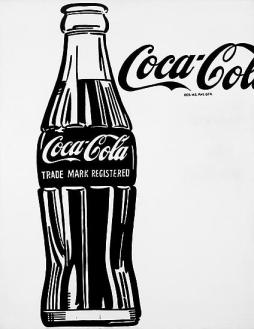 The Pop Object at Acquavella Gallery and Gutai: Splendid Playground at the Guggenheim have little to do with one another except time frame (roughly the 1960’s) and the venues’ proximity.  I went to see the Pop Object (open through May 24) first and it was a bright and shiny beacon of 60’s Pop.  Mostly the big names are here but there are a sprinkling of the artists that aren’t chart toppers; among them are Stephen Antonakos, Robert Arneson and Marjorie Strider.  Two Vija Celmins paintings and one Ruscha work on paper stood out as quiet examples of the object with less obvious pop sensibilities that belonged never the less.  Surely there were great works by (mostly Museum loaned) Warhol, Johns, Rauschenberg, Rosenquist, Thiebaud and Wesselman.  The overall takeaway was that getting so much great pop art in one place is absolutely worth the trip.

Gutai was another thing altogether.  The ideas of the Gutai group led to a variety of experimental techniques and performanced based painting methods.  The production of art was of primary importance and the remnant, the art, was secondary.  The Guggenheim did an excellent job presenting this work.  They used the space wisely and made smart exhibition design choices, using pieces as screens and creating platforms and site specific recommissioned installations.  This was the best use of the beautiful but problematic rotunda I can remember, though I really enjoyed the journey of the Tino Sehgal performance works in 2010.  The website and app for the show are also incredibly informative and fluid.

Installation platform, made of blonde wood 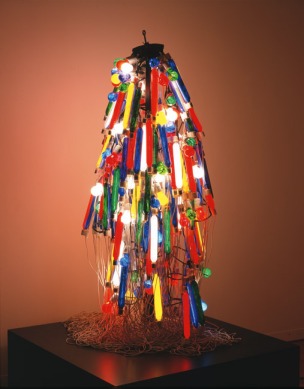 Atsuko Tanaka crystallized as the most important of the group in my thinking about this show.  From her works on paper (some pretty, some challenging), her conceptual sound piece “The Bell” and the piece she is best know for The Electric Dress, she exhibited constant innovation and made beautiful objects.  I like Kusama very much and since she has nudged the door open for Japanese Avant Garde artists, can some American Institution please review Atsuko Tanaka’s varied contributions to contemporary art.  Others certainly engaged me and led me to want to read and hear more.  There was an alluring film by Shimamoto Shōzō made of found newsreel, degraded with vinegar and painted on.  His action paintings (hurling paint filled bottles at canvas) were less interesting. Yoshihara Jirō, the groups guiding force made beautiful, unrevolutionary but aesthetically pleasing, canvases. 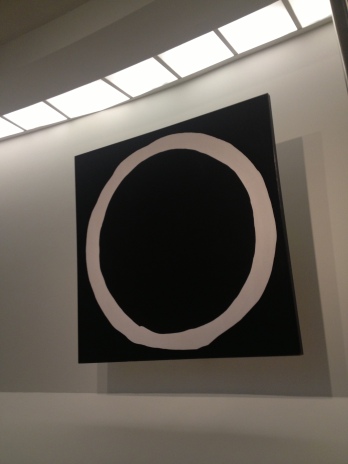 In my mind a battle began to rage, Pop vs. Gutai.  Glimmering plastic things versus messy conceptual work.   Rubber Soul vs. The Plastic Ono Band.  What is it to see these things created at the same time, but in extremely different places?

I now think it doesn’t matter.  Pop and Gutai are reactions (what isn’t) and no longer need to account for the movements that came before.  Both are self described and self aware movements, though Pop was inclusive because it had no central guiding group and Gutai was bound to specific place.

Value is assigned in many ways, and I am certain the Coca Cola bottle from the early 60’s at Acquavella could buy everything in Gutai, but the works here are of great value.  I am glad the story of contemporary art is no longer the story of what happened in only a few places.