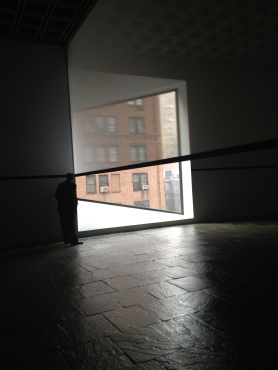 At the Whitney – 3 shows – Robert Irwin, Edward Hopper and I. You. We.

It was a pleasure to see Robert Irwin and Edward Hopper at the Whitney at the same time.  In advance of this show, my connection between these two would have seemed vague or nonexistent but for the idea of light in a space.  The formal connection is much stronger though.  Irwin’s piece, originally created in 1977, is being represented because the Whitney will no longer be in the Breuer building and Irwin created the piece for his solo show there.  In subsequent years artists have engaged with the architecture of the building (R.H. Quaytman in the 2010 biennial) but Irwin’s will only be able to exist in that way, in that room.

The idea of Scrim Veil – Black Rectangle – Natural Light, 1977 and the thing itself are one in the same.  The room is less an optical trick than an architectural intervention.  Consider space, consider the framing of a window, consider the way light travels in a room and consider all this with a porous veil hung at a height where ducking is necessary for most of us.  I have long disliked the Breuer building that is the current home of the Whitney.  I have always worried about seeing art there.  The Whitney seems to take all the modern materials Breuer wanted to use to create a cell block for art.  Here Irwin frees the light and your experience of the space becomes, for the truest sense of the word, illuminated.

Walking down those ugly brown steps, steps that always have seemed to find a way to trip me up with their stubby landings, I walked into a show worthy of any great New York art institution, Hopper Drawing.  Hopper seemed to have had his time and his place.  People take his pretty coastal images, his solemn city scenes and light infused interiors as a remnant of some earlier era.  There is nothing wrong with viewing a Nighthawks or an Early Sunday Morning for its amazing technique and pretty sparseness.  When given the opportunity to see how Hopper constructed his work, you realize that he was a master of composition yet makes it look effortless in his work.  Maybe I find too much here that connects the two, but in the interior scenes I found Irwin’s light.  In Office at Night, a polygon of light stretches in, showing us that most likely this vignette is courtesy of an elevated train rushing past the window.  A man and his secretary work long hours.  In one study, the nature of their relationship is revealed to be either that of a standard employee/ employer relationship.  In another, with a subtle twist of the head and jutting of the hips, something untoward develops in the scene.  This work might as well be contemporary. 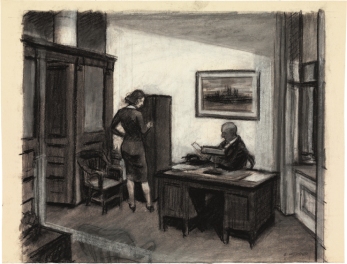 Hopper’s drawings give great context to these final compositions.  If the Office at Night is an example of potential lewdness, his silent nudes are pure voyeurism without the pretext.  It is clear that our man Hopper liked to look through the window and show us what he might see.  The reality is that the what lay beyond may never have lived up to his desire or ours.  As success came, Hopper was able to create light kissed rooms and bodies, each figure waiting for the day to come, or remember the one that passed.  The room and the woman are stripped bare and the light that bathes them gives us a moment that is pure.  Nothing is covered up and all can be seen, truly naked.  I get the sense Hopper wanted us to look in his later paintings as we would in a window.

I. You. We. is a rare treat for a variety of reasons.  It deals with the subject of the AIDS crisis directly, and queerness peripherally.  It deals with strife of various forms in the 80’s and 90’s  It bucks the trend of a permanent collection show in that it doesn’t seem to have depended much on a single major name or piece.  Here are Basquiat, Johns and Mapplethorpe.  They are here for good reasons, but just as important are Catherine Opie, Carrie Mae Weems, Martin Wong and Robert Gober.  As a show, it works because it is worth looking.  In one small room, Sue Coe, David Wojnarowicz and Nicholas Nixon give us death incarnate and Keith Haring offers redemption. David Kiehl did a very nice job making this a show to highlight how well the Whitney has collected. 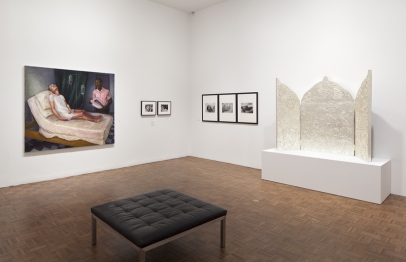 Ken Price at the Met

Is there still a stigma against certain materials in art?  Ken Price doesn’t need a champion.  His career, while i’m sure not always easy, took him to many of the same places as his contemporaries or further.  Maybe the real conversation is that he was marginalized not because he made silly cups, but because he was from LA.  Billy Al Bengston, one of his nearest and dearest for over 50 years, has never achieved anywhere near the same success.  Many of the Los Angeles crowd, those that centered around the Ferus gallery at least, have made a name now even if they were left alone by nearly all of the international art scene for 40 years.  Irwin and Turrell thrive.  Ruscha is an untouchable.  Baldessari is the goofy professor and McCarthy the clown prince.

Rather than a review, let me simply state that this is a show that you should see.  LACMA and the Met did the right thing letting Frank Gehry design the exhibition.  Price makes wacky, off-kilter,  beautiful things.  Some shimmer and glow, while others hide their gaudiness in impossibly detailed color shifting skins.  Snail cups, Modernist Home cups, Bicycle Racing cups and more get placed towards the end making them seem as though they are the least important and most silly.  They win you over despite their lack of seriousness.

Price was not a prophet, preaching ceramics as the path to follow.  He loved what he did and it is evident.  These are objects to love.