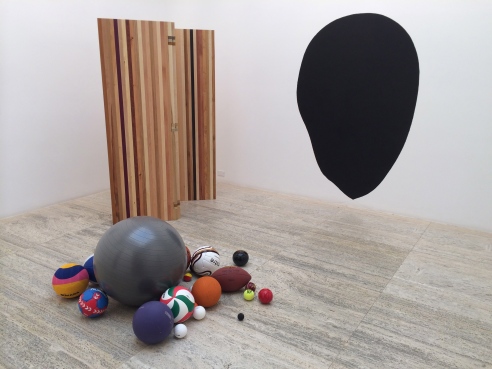 Incomplete. Unfinished.  Tentative.  I say these words often in the conversation about art.  The connotations of these terms are clear, but I think they can be used as hopeful and even positive.  Martin Creed is one artist with which I feel comfortable using all of these terms.  I try not to use “oeuvre” because while I know its meaning it’s not my word.   I like to talk about an artist’s work.  While they are here, alive, their oeuvre (there it is again) is incomplete.  If you did want to get a handle on Martin Creed’s work though, Martin Creed Works (The book), is the place to start.

I approached the Creed show at the uptown Hauser and Wirth with no preconceived notion.  I had seen and heard some of his work, read a few things and knew generally what to recognize as “Creed”.  There are currently 3 shows of his work in the New York area: the others being at Gavin Brown’s Enterprise and Scales at The Aldrich Museum of Contemporary Art in Ridgefield, CT.  I have not seen those, so in keeping with Creed’s serialized sensibility, this commentary and review is Creed No. 1.  Expect Creed No. 2 and Creed No. 3 in the coming months.  I suppose that makes this review incomplete, unfinished and tentative.

What I found at Creed No. 1 was something joyful, silly and moving.   I found color and form, abstraction and figuration, silly sorrow and sad play.  But mashing words together only gets you so far.  There is a term the Canadians use that I have always enjoyed: shit-disturber.   You know what I mean when I say it.  Creed is, though I’m not certain he wants that title.  He uses abstraction, found objects, neon, bronze and many of the tactics and models of conceptualist but he is not a self-described conceptual artist.

Among the things (Creed likes the term thing when describing his art) here, one will immediately notice that there are arresting, though tentative, portraits.  The color and loose line evoke Fauves and Lucien Freud.  It turns out they are “Blind Portraits”, in which Creed looks solely at the sitter and not at all at the image while he executes it.  In one instance, we see a “Jumping Portrait”, created while the artist was in fact jumping to reach the work and paint it, framed high up on the wall.  The press release states that this allows the artists to “rigorously abdicate from the need for aesthetic decision-making”.  This is the case, but the consequence is of much greater interest than the rubric by which they are created.  These people live boldly in his images.

According to Creed, he does not want to be thought of as a conceptualist, because that term negates the emotional and personal nature of his work.  He works to feel human, to feel productive, and to feel better.  He has written these things as works (Work No. 470).  These portraits are expressive and by far the most human of the work in the show.  I mean this to say that they are obviously sketched by a person whereas other work in the show seems more precise or fabricated.

Beyond portraits there is neon (COCONUTS, Work No. 1524), abstractions on canvas that seem brushless, painting on the wall that seems purposely unfinished, a pyramid made out of toilet paper and small abstract paintings that look to be made in the least number of brush strokes.  In the back of the first floor are a collection of balls, a steel structure, a wall painting and a woven fabric.  It is a mini-retrospective of Creed’s gallery appropriate efforts.  The room, like the whole show stands on its own without much introduction, though it benefits from some elaboration. 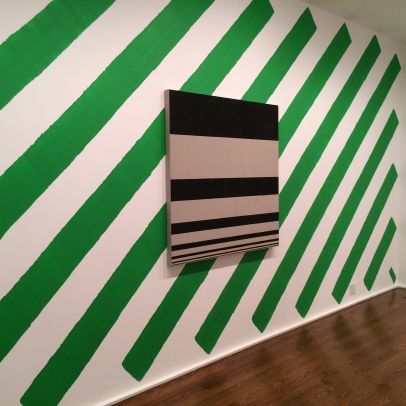 Upstairs, small and large sculptures (the aforementioned toilet paper pyramid Work No. 1782, also appearing in Miami for ABMB) are surrounded by painted forms.  One green diagonally striped wall (Work No. 1781) has a raw canvas with horizontal lines of black (Work No. 1773) mounted in its center.  Small and large works, sculpture and painting;  it feels like a group show where you’re happy to see so many disparate styles.  It’s all Creed.

Martin Creed seems to grow beneath the surface like a root system, sprouting different species of plants at different places.  His art (cacti included, Work No. 960) is his work and the only thing he makes as regularly as his art is shit.  He has commented on and recorded on video shit (none of it is here luckily).  He has done the same with sex and vomiting.  I am not sure whether these pieces are good, bad or an attempt at good old fashion eyebrow raising.

You can draw your own conclusions.  I think Creed is a different thing than the conceptual artists of the 60’s and 70’s.  He works by Duchamp’s playbook.  The personal, humorous, occasionally raunchy, occasionally mundane things all point in that direction.  The blind painting and the readymades as well.  Creed most likely won’t give up art for chess, but I would not count it out.