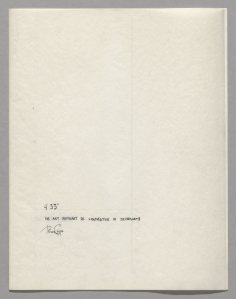 Barbara London’s Soundings at MoMA and it’s related events made a great impression on me in 2013.  William Anastasi’s sound works, a performance of Drumming by Steve Reich, Janet Cardiff at the Cloisters, a composition by Tristan Perich and finally, a show now on at MoMA called There Will Never Be Silence exploring John Cage’s 4’ 33” have all fed my growing desire to understand sound as art/sound in art/ sound art.  Mark Swed’s piece for the LA Times will give you a great primer on whatever you missed this year.  In fact, the Aldrich Museum is having an event this weekend dedicated to Cage as well as Fluxus, if you feel like getting out to CT and learning more.

This last piece, the Cage show, is an excellent resource for people hoping to delve further into the Fluxus archives and the Seth Siegelaub papers at MoMA.  There are many small things here that build the incredible history of some boldly noncommercial milestones.  The Times and Gallerist have had their say about it, and I will keep my thoughts brief.  Though it is fair to use Cage as the central idea for the show, it may in fact pay short shrift to many of the other available influences.  Though the connections between Duchamp, Cage, Johns and Rauschenberg run deep, telling the story as a lineage seems too easy, though just right for a small museum show.  The experimental work that is exhibited here is strong and strange.  Only MoMA has the depth to do a show like this and I wish it would have been on the scale of Soundings or larger.  What an amazing companion this show, in an expanded version, could have made to that.  The list of artists telling the tale of sound and performance as well as the more canonical painters (Newman, Ryman, Johns, Rauschenberg, Paik, Weiner, De Maria, Ono, Young) is staggering.

There is a confusion in the conversation that relates to art focused on sound rather than visual media. Sound art, while often composed only of sound and not always music, is still often spoken of in terms related to music.  Sound as art and sound in art are becoming increasingly important to the larger discussion of fine art. The fact of the matter is that all visual art discourse and musicological discourse both relate to sound art.  Without the sounds of the instruments that many of the artists use to create what is known as sound art or is classified as such, they would have no palette with which to paint. I use that analogy in a very purposeful manner. We should not forget that sound outside of the fine art discourse has many other meanings. It is those manifold meanings that make it such a potent source for creativity and innovation.

As curators, institutions and historians have very recently embraced the role that popular music and film play in contemporary art, sound and it’s history will be drawn into the conversation.  And not just purposeful, high-minded musical sound but sound in popular culture.  MoMA and the Smithsonian collect video games, so why not the Hulk’s growl or a coin slot payphone tone or the Windows first boot up noise.