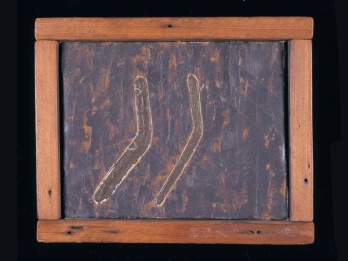 Forrest Bess is part of many narratives in art.  As an abstract painter, he was dealing with the same reduced form and symbols that others grappled with in the 40’s and 50’s.  Some have developed his story as an outsider and I thought that this line by Karen Rosenberg in the Times summed it up nicely: “To a market still intent on labeling ‘insiders’ and ‘outsiders,’ they offer the conundrum of an artist who showed at the Betty Parsons Gallery in New York in the 1950s, alongside Rothko and Pollock, but made his living as a bait fisherman in Bay City, Tex.”  Some discuss his very physical response to his identity, in that he performed self-surgery and self-described as a “pseudo-hermaphrodite”.  As far as I know, he still identified as “he” after this transition.  He wrote to many, including President Dwight D. Eisenhower, to describe his transformative surgical discovery.  The artist wanted his notes on symbols depicting both the physical elements of his transformation and his treatise exhibited with his art.  All of these things are true.  All have been used to explain his work and tell a complicated story.  I worry that some have, or will, exploit his life to sensationalize these small, lovely paintings.

Bess was a painter.  What he paints is a story of who he is and hopes to become. Without his story, we have small paintings, framed in smooth, loved wood, Usually no larger than a bread box.  Let us assume for a minute Bess is unknown.  That his small abstractions are left to rot without title or context.  And someone discovered them, without the Bess narratives.  Then what?  The symbols remain, some vague and some explicit.  We would still see a struggle to portray the masculine and feminine and all of the places they intersect.  They cannot be removed from his work even if Bess was a ghost.

Jewels like these paintings are a gift to current painters who herald his willingness to work small, create simple, and make no excuses.  The paintings are anchored in a single color, presenting a central idea boldly. Every color and texture is straightforward.  50 small paintings sometimes read like unfinished flags or textile designs, some like a bright psychotic moment.  Practically all colors are offered, but rarely more than 3 or 4 per work.  The form of a skinny rectangle, rounded at the edges bandage-like, appears 4 or 5 times.  Some use a natural form of a bird or spider to mimic basic symbols.  Few contain more than two basic symbolic themes, and rarely that many.  Paul Klee lives in many of these paintings.  Though I haven’t had a chance to delve into the catalog, I will happily take any chance to spend more time with his images. 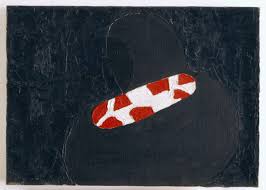 Confusion arises when people heap on extra meanings to pull out their meaning, pile on extra hopes and dreams to tell the story they want to tell about this enigmatic man. That confusion is well earned, and I hope each visitor to Seeing Things Invisible will sort out for ourselves what it means to be a person who went to such lengths to become a singular human in art and life.  Then, when all the dust has settled and articles written, take their time with the paintings.