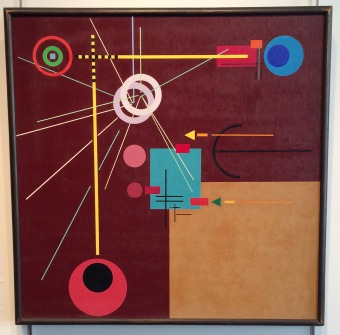 Since I spend the bulk of my waking hours in midtown, I thought I would highlight a few uptown shows that I have seen as well as a few Midtown and LES shows I am hoping to catch very soon. First a few recommendations in Midtown:

Tibor de Nagy is making their history visible with Starting Out, 9 Abstract Painters 1958 – 1971.  Though I can’t say that everything I saw worked for me, it was nice to see a shaped Kenneth Noland canvas next to a radiant Darby Bannard (who I was completely unaware of before my visit).  The Jane Freilicher at the entrance is superb as is the Edward Avedisian used to promote the show.  Historic group shows like these are worth the education.  Along those same lines is the show next door at D. Wigmore.

D. Wigmore has a beautiful group show Reimagining Pictorial Space: Abstraction of the 1930’s and 1940’s.  It is a long title for an oddly specific look at American abstraction during and just after WWII.  Charles Green Shaw and Burgoyne Diller are excellent here.  A surprise discovery for me was Ed Garman (image at the top), a member of the Transcendental Painting Group lead by Emil Bisttram (in the exhibition) and Raymond Jonson (not).  Garman, Jonson’s biographer and disciple, is represented here by two works that draw a direct lineage from the pages of Kandinsky’s Point and Line to Plane.  When I look around at prices here it is obvious that less-loved, less well known abstraction from 60- 75 years ago, though occasionally derivative, is deeply undervalued.

Now, on to some uptown shows  I am looking forward to:
The Shaped Canvas, Revisited at Luxembourg & Dayan
John Cage and Artists He Collected: 1990/2014 Strategies of Non-Intention at Sandra Gering
Eddie Martinez at Half Gallery

And the Soho and the LES shows I am looking forward to:
Polly Apfelbaum at Clifton Benevento
Daughter of Bad Girls at Klaus von Nichtssagend Gallery
Elaine Lustig Cohen & Heman Chong: Correspondence(s) at P!
Supports / Surfaces at Canada which was the subject of a panel discussion there this week.  You can read about the S/S movement and the panel at Two Coats of Paint