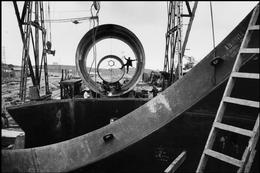 Walking into the Rubin Museum I expected very little from the exhibition of Francesco Clemente, ostensibly the result of his decades of conversation with India and it’s artistic practices.  To say the show left me cold would be an understatement.  Clemente is by no means a bad artist, but the work here was mostly borrowed and embellished kitsch.  The wonderful surprise was the newly opened Marc Riboud “Witness at a Crossroads” exhibition.  A Cartier-Bresson disciple and Magnum photographer, Riboud covered Asia a great deal during the late 50’s and early 60’s.  The show (and museum) are focused on Asia, leaving the rest of Riboud’s career relegated to a timeline in the back corner near the emergency exit.

The good news is that the images are nearly all excellent. Riboud‘s years in Asia were fruitful.  His eye and lens often found subjects that were less about perfection of form than distinction of character.  Cartier-Bresson had many great images often illustrative of a specific moment.  Riboud finds these moments but also manages to celebrate singular characters.  A man working in a munitions factory and a woman working with her hands, just beyond the frame are not emblems but distinct people.  The images hang next to each other; both are lovingly composed portraits, regardless of dress and era.

A hydroelectric dam in Turkey is being built and the workers (mostly not working) half pose for Riboud.  One climbs up into his pipe, leaving his friends earthbound.  He is balanced in the metalwork interior that looks like the gargantuan sight of a gun.  Hanging there, he is a Vitruvian Man nearly in the cross-hairs.  He is mugging for the camera with a chance at immortality rightly considered.  In another image a splay-legged man rests on the railing of a bridge looking out at Ankara.  The bridge rail is moorish, all angles subdivided hexagons like a math problem.  We see him from behind and gain his vantage point.  We see his patchwork jacket, rebuilt many times over until it is a mashup of lines and textures.  His stance seems not quite like that of a relaxed man, but rather one waiting though for what is lost to time.  Across the way a man no older than 20 stairs deeply at a gun.  The gun gleams, cleaner than anything in the room, brighter than the glint of the eyes of the man brandishing the weapon.  He appears to have equal parts pride and fear of what he has produced.  My friend commented that Riboud’s images were very French.  This friend (who has an advanced degree in what French art looks like) was right.

The image that made this show go from good to outstanding is the image labeled China, 1965.  We sit inside a store front with 6 windows into the street ahead of us in a destitute ward.  10 figures of varying ages, mostly very young or very old seem to wait for nothing.  All able bodied adults are gone, presumably working. The 6 panels are each their own frieze with lower sections containing people and upper sections focused on the crumbling beauty of late 19th century buildings.  Everything is shabby, but life marches on.  The picture looks like an ancient altar piece made in segments, showing the cycle of life and acts of charity.

This excellent fine art photography show was created by a man whose assignments were documentary in nature.  This is not to say that documentary images cannot be beautiful, but the implication is that this finely curated group is a tiny part of the story.  That could be said of every individual photograph.  Much of the war and poverty of the time is not in the viewfinder for Riboud’s show.  The politics, strife and famine of these places and that era must be another show.

One Response to “99th – Marc Riboud at The Rubin Museum”