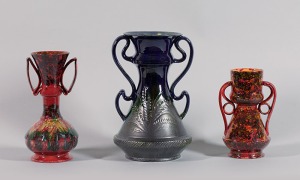 I think it is possible to see the world you want to see in something small.  I think you find an object that is functional or beautiful and you can fall in love with it.  Thanks to my children, I remember and understand the desire for collections, especially of things in miniature.  If you can’t possess it, maybe you visit it often, as long as it remains something in your life’s routine.

I recently visited Craig F. Starr Gallery for a show of work by George Ohr and then Dominique Levy for an Alexander Calder show (which has since closed).

I know little to nothing about pottery and only a tiny bit about George Ohr.  I know that his work has been influential too many artists, especially ceramicists.  George Ohr was known as the Mad Potter of Biloxi though he certainly had training and education before he earned that honorific. As happens so often with outsider artists the myth looms larger than the truth.  Ohr’s pottery lives on because of a combination of these things; the story and many collector’s obsession and the esoteric and beautiful.

Overall, there has not been a serious investigation of ceramics as fine arts until recently. Many contemporary artists have and continued to expand what is possible.  The Met’s Ken Price show was a big event for sculptors who use a ceramics as their medium.  Since I knew Price first, I am working my way backwards.

In many of Ohr’s pieces it is easy to find an entire planet of color and differentiation.  The glaze forms continents and oceans. Vases and cups mingle with lovely and unusable forms.  The crowd is motley.  One entire section spotlights the unglazed or bisque works.  The are many of them here and they show a clarity of form unencumbered by intense coloration.

Still, I write as a novice on the subject. I would recommend the George Ohr show if you are interested in beginning your own investigation into sculpture made this way.

Alexander Calder presented at Dominique Levy was a bright white wunderkammer of matchbox and shoebox size art. Calder created many beautiful small things and I suspect he was a collector himself. By this I do not mean a fine art collector, but rather someone who took great pleasure in small and idiosyncratic things. The experience of seeing his sculpture as miniatures produces a different and wondrous sensation then seeing them 30 feet tall. Calder was a magician, a mechanic and an engineer who composed beauty with all things.

By now it should be clear that these two exhibitions incited a nostalgia in me. The strange and small and often discarded things that my children love so dearly are not so dissimilar from Ohr and Calder.