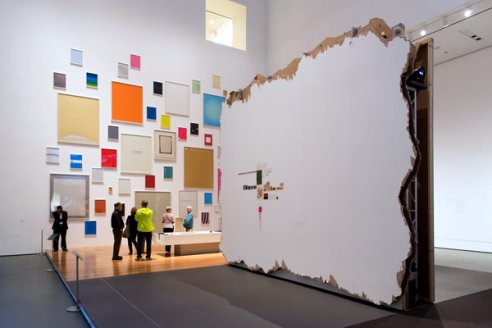 I learned many years ago to question the newspaper, the history books and any page with a critical mind.  I read with caution and all facts are suspect as opinions.  One of the people I learned this from is Walid Raad. So read these words knowing there is a bias and some history there.

Walid Raad currently has a mid-career retrospective (recently migrated to ICA Boston from MoMA) and an exhibition at Paula Cooper.  Speaking critically about them is a fool’s errand, for me at least, and so I’d like you to consider some of the conceits and methodology at play.  Raad’s work is a reminder that institutional critique is a living, breathing thing.

In the show at Paula Cooper, Raad gives us a room of walls entitled Letters to the Reader, facsimiles of the Museum of Modern Arab Art in Beirut’s walls.  The artist has noted that the shadows of each piece have fled, apparently they have come unsewn like Peter Pan’s famously fugitive form.  Each wall has an ornate cut, not Fontana’s slash but a intricate space meant to allow the shadows to return comfortably and non-proverbially, home.  It is a cradle for a lamming absence of light.  These newer works are a departure from the artist’s long term project of the Atlas Group, but fit comfortably among the later group exhibited at MoMA under the heading Scratching on Things I Could Disavow,

Raad’s MoMA show has transmogrified objects that belong to a similar conceit.  The artifacts, shipped from The Louvre to Abu Dhabi, swap character and form to create new relics.  Glass, ceramic and wooden forms trade places.  In the body of work entitled Scratching on Things I Could Disavow, shadows and colors flee and an entire show shrinks to 1:100 scale out of protest or molecular shifts known only to the objects themselves.  And so I ask, When an artist shows you work that transforms or retreats and lives lives other than those the artist has intended, must we take it as fiction?

Alan Gilbert’s two-part essay Walid Raad’s Spectral Archive at e-flux provides a catalog worthy essay to elaborate on these many practices and products and produces the quote “Rather than writing an unwritten history, Raad’s art aims to write the writing of history.”  This best applies to the earlier body of work known as the collective archives of the Atlas Group.  For these newer works I would say that Raad aims to give form to the active transfer of art from state to state, within the context of financial and political power.

Better yet, Raad makes things that become refugees; forced to deal with the circumstances of the world as they are, not as they should be.