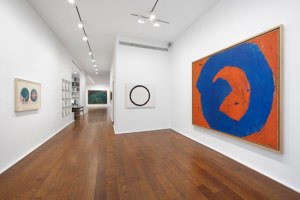 Gutai is a word you should learn soon.

Japanese artists banded together in the mid 50’s, barely a decade after WWII most final of conclusions. They saw Pollock dripping in Time magazine and began to make their version of art that didn’t exist in the world already.  If I should have know about Gutai before, I missed out until now.   The Guggenheim has a show going up in a few months dedicated to Gutai artists called Splendid Playground, so there will be more Gutai artists to see here in New York in February.

Wandering into Hauser & Wirth’s gallery space to see A Visual Essay on Gutai, I felt a bit sad.  It is not that I didn’t like the work immediately, quite the contrary.  It fit my idea of what I should be seeing and that left me feeling a bit empty.  I wanted more of the mind-changing, shifting axis of the earth kind of thing.  Instead I saw beautiful painting by Jiro Yoshihara that seemed both polite and full of substance.  Most of the work on the first floor of the exhibition proceeded this way.  The comparison’s to Western abstraction are everywhere, so much so that one reviewer felt the need to write art historical fiction to explain all the possible paths of the Gutai artists.  Hoffman, Appel, Motherwell, Twombly and all the AbEx and Color field crowd relate to the first floor of this show.

When I made it to the second floor, I got that axis shift I had been yearning for.  Takesada Matsutani’s work looked old and worn in the best possible way.  The yellowed vinyl glue, possibly this color since the day it was made, looked to be running away from the canvas.  Where Fontana cut and Frankenthaler poured, Matsutani allowed this industrial material to flow and become dimensional.  After seeing the early white Kusama paintings a few weeks back at the Whitney, I couldn’t help but draw a connection.  But these bio-organic nodules sit on the surface like sculpture, rather than making a field.  Work 66A by Matsutani was a canvas that seemed to barely hold the 3 dimensional forms of white and yellow, looking like an ostrich egg smashed and leaking against the wall, mid-collision. 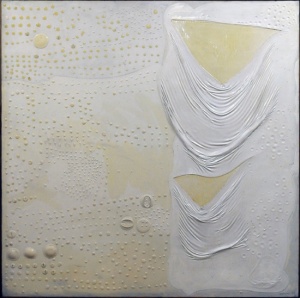 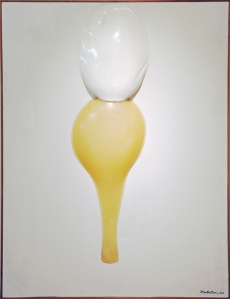 Other revelations came in the form of Norio Imai’s White Ceremony, 1966-2012, the altered surfaces of which had voids that worked like an Anish Kapoor sculpture.  Tsuruko Yamazaki’s reflective surface with lights read like Nam June Paik and John Chamberlain placed too near one another in a small museum, garish neon reflected on crumpled tin.  I am anxious to see more.  This show is just a primer and an incomplete one at that.  You have until October 27th to get to see it and I recommend that you do.