I know what Digital art is.  Web-based art is unsellable so it is clearly “capital A” Art.  Digital images are okay, except when they aren’t.  Photographs that are shot on film, but altered digitally are great, mostly.  Photographs that were taken digitally are okay, as long as they aren’t also edited digitally, except when it is an established artist, then that is fine.  Sometimes an artist can use digital photography for big reasons, or new reasons, or ironic reasons, and all that is okay.  Sometimes an artist wants to mess with found digital images and that is great as long as it IS overtly political or conceptual.  Digital video is new and therefore is completely acceptable as art, unless it’s too new and too good looking, like FILM good, then it’s not, except when it is awesome.  A young artist that has never NOT been digital, can be digital all day, every day.
And Digital art should always be something you had to make digitally, that you could never have realized without the pixel-shifting, reality-altering, vision and mind-warping effects available to us exclusively through the aid of a computer, except, you know, you’re already super famous.
All credit to S. Bear Bergman’s Butch is a Noun for the inspiration for this rant.

Alright, that is kind of jaded and snarky, but I mean it.  Why are these the big WHY’s? of art,  Photography as art, then Video as art, Performance as art and so forth.  Major galleries exhibit and represent performance and experimental art (not enough).  There are galleries (who we will be talking about shortly) who think of the presentation and graphic design of the gallery as a substantive part of the current show.  Why not?  Why can’t brand identity be tied to the current exhibition, just like the color of the walls.

The fact is that we make excuses, exceptions and (I need another E here people) emphatic denials (almost) of what we are allowed to do digitally.  Personally, I see an object/image/video/programmed web-based project, and think about whether I am into it, not if someone used Adobe to make it look different.

This brings me to Richter.  I feel like making some crack about the great and mighty Gerhard Richter ala Oz, but it isn’t that way really.  Sure, his art might command prices unrivaled by his contemporaries, or anyone living, but he is just part of the machine that is driving this.  While a 41 year old Wade Guyton’s inkjet paintings are collecting accolades up at the Whitney, Gerhard Richter’s digital Strip Paintings were at Marian Goodman on 57th (just closed, sorry folks).  I think at this point, I would be happy to kick the pedestal on which Gerhard sits, but I liked this show. 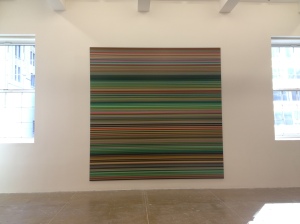 From the press release: “As Benjamin H.D. Buchloh writes: ‘The status of painting in these new works is figured as exceptionally fragile, yet it is powerfully formulated in its assimilation to its technological challenges, as though painting was once again on the wane under the impact of technological innovations. Yet in its application of almost Duchampian strategies of fusing technology and extremely refined critical pictorial reflection, Richter’s astonishing new works open a new horizon of questions. These might concern the present functions of any pictorial project that does not want to operate in regression to painting’s past, but that wants to confront the destruction of painterly experiences with the very practice of painting as radical opposition to technology’s totalizing claims, and as manifest act of mourning the losses painting is served under the aegis of digital culture.’”

Well damn, that just about says it all.  As for the Duchampian strategies, only time will tell if Richter’s overblown prices and rapidly progressing canonization will lead him to the same place as our man Rrose Sélavy.  Gene Davis, Daniel Buren and Kenneth Noland deserves a bit of credit here (well they are just stripes), but with the extreme to which the technology drives the image, Richter owes more to early art technologists.  Now, who these people are, besides Bucky Fuller, I am clueless.  David Hockney’s fax drawings and iPad doodles deserve some credit, but thats not about augmenting the image.  Cory Arcangel (the Digital images are okay above) has made the case for purely digital image making.

Getting to something like a review, these prints or paintings are pleasurable if a bit dizzying.  I enjoyed the show, but it took me some time to get there.  The strips are pretty, but better when there was less dense color.  By way of abstraction, the strips are unambitiously beautiful.  Yet I could not dislike them, rather,  I felt entranced.  I left feeling as though these massive strip paintings were big only to be big, but later it dawned on me, size matters  The scale of the smaller works on paper were over-the-couch sized, the large ones are museum retrospective sized.  The more time I thought about these works, the more I enjoyed their immersive quality.  The more I thought about their process and what made them come into being, I somewhat begrudgingly, respected their purpose for existing.  One painting can be the seed for all paintings if you look at it the right way.

I am going to let the academics, critics and collectors duke it out over whether these works are important enough to be first rate Richters.

This all reminds me that I was fairly sad to miss Postmasters Richteriana show.  Not all Richter-like art is created equal.