Claes Oldenburg made blemished and ugly (mangy-but-loveable dog ugly) handmade objects at a time that coincided with the rise of Pop.  These items were telling the same story, but in a less grand and politicized fashion.  Oldenburg sold us back our stuff.  Stuff that looked like it was from a kids art class project.  Stuff that was sad and silly.  This stuff, the burgers and ray guns and women’s shoes were becoming high art while they were still very much low brow.  I had idolized the Floor Burger the first time I saw it in Jansen’s (or whatever art book we were going through in high school).  Floor Cake at MoMA was a strange and slightly disturbing thing to see as a kid.

I think somewhere around this time I read Breakfast of Champions.  I am sure that I didn’t make any connection at the time.  Kurt Vonnegut is mostly plain spoken, with humor and satire wrapped up in the actions more than their words.  Vonnegut’s asterisk-like drawing of an asshole paired with a needle was the strangest thing I had seen in a work of fiction.  Come to think of it, any image in a work of fiction was strange.  Oldenburg’s piece work dress shirts are in essence the same as Vonnegut’s words and images.  Life is odd, and these men have pointed their wit at the facts of this reality.  Vonnegut might tell us a tale that leads to nowhere or total annihilation with the same tone.  Oldenburg treats ray guns and high tops to the same hand made fabrication. 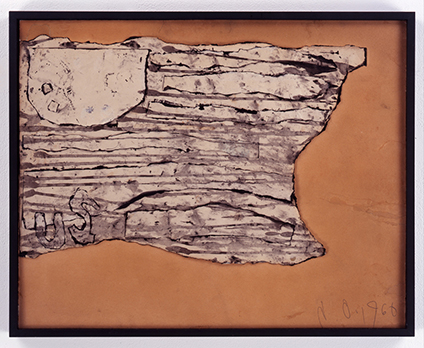 To my great surprise it was some of the most drab and least “Oldenburg” type work that blew me away at MoMA.  “The Flags” series was made in Provincetown in 1960.  They were souvenirs and supposedly had to do with the commercialization of patriotism.  These driftwood and scorched paper assemblages are true to what they have set out to be.  U.S. Flag, 1960 is the unvarnished reality of what a flag exists to be.  Johns encaustic Flag and Three Flags images are classics, but there is something so wonderfully different about this ramshackle flag.  All of the Oldenburg flags are noteworthy but placed so that you might miss them.  Don’t.

Here is a list of everything in the show (Thanks MoMA).  This is up until August 5.  Brave the crowds, it’s worth it.

One Response to “42nd – Oldenburg and Vonnegut”