Paul Reed is a name I didn’t know and I am guessing you don’t either.  He is a Washington Color School artist that, from what I can tell, was forgotten outside of a fairly small group of collectors, curators and writers.  He is also still with us at 94.  It is unfair to be forgotten and left behind, but since when has fame and fortune ever smiled on fairness.

The first time I saw Paul Reed and The Shaped Canvas in the 60’s at D. Wigmore it was on the floor.  All of the work had yet to be hung because I peeked in before it was open.  I do not like to bother galleries during install, but I was compelled by what I saw: canvases that were glowing and seemed ready to lift off into the sky with Lucy and her diamonds.  They were restrained in a way, at least as restrained as a day-glo rocketship can be.  I was in awe.  These shapes, not all bizarre and outlandish, were full of color, opacity, clean line and geometric brilliance.  I saw canvases recognizable as Kenneth Noland and others that seemed familiar as Stella but were actually Thomas Downing.  Gene Davis even makes a brief appearance.  The shaped canvas might seem like old hat to those of us who have spent our childhoods at MoMA, but Reed was doing something in the 60’s that remains fresh today.  They are jewel like, prismatic and filled with brightness.  They relate to Light and Space art as much as they do colorfield painting. 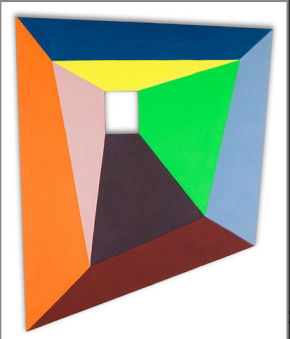 I think its best to zero in on one of them.  Margem, 1968 is a irregular shape, like a square that has been tugged at by its lower left corner.  It has a rectangular void, probably no larger than 8” x 6” at its focal center, but actually up and to the left in this (on its longest sides) 55” x 44” canvas.  It has 8 colors, an interior grouping that radiate out from the empty rectangle, and an exterior grouping.  The shape of each segment eludes to to depth and possible even classical notions of the golden mean.  It is born of geometry, but lives in a multidimensional space.  The image seems timeless in a way, beyond fads of color choice and finished surface.  I loved many other things in this show, but Margem is a pure expression of color and form.

I am glad for this show.  There is an excellent essay and small catalog online.  Let them tell you who he was and why he did what he did.  I am happy just to know he exists.

The NY Art Book Fair is a great mess.  I am a fan of messes with purpose.  NYABF is a scene.   But if something being a scene kept you from good stuff, New York would be a serious disappointment.  The fair is an exchange in many ways that most modern art fairs can never been.  Even the smaller satellite fairs do not offer this type of accessibility.  I will happily take a faux bazaar over an store posing as an exhibition any day.  You could buy one dollar zines or $100,000 portfolios by Ed Ruscha.  Many bookmakers and publishers were there with nakedly commercial goals, but with a product that  has so little to do with the commercial art world that it was refreshing.  There may have been a few too many tote bags and posters, but I LIKE tote bags and posters. 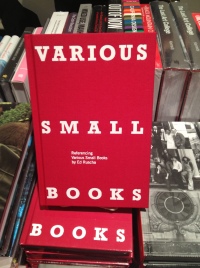 So I will tell the story of my visit to NYABF in the things I got and things I didn’t get.  What I took home is first.  Various Small Books by MIT Press investigates the history of artist published books that emulate Ruscha’s Various Small Fires and beyond.  Books about art books: what’s not to love?  Ridinghouse had just released a book of Dave Hickey essays (it takes 3 weeks to get on Amazon!) called Pirates and Farmers.  Its central premise is that all people are one or the other.  The essays are collected from far flung sources so it seems like a treasure chest and less like a Malcolm Gladwell book that could have been compiled with tape, scissors and 12 months worth of New Yorkers.  I will review/comment on/emulate this book soon.

I also purchased the Long Island City Sundial Field Guide from Heidi Neilson at ABC [Artists’ Books Cooperative].  I had the good fortune to show some of Heidi’s drawings around this project 4 years ago and they make a truly intriguing document of the massive change that even one piece of monumental architecture can have in one neighborhood.   Paula Cooper had an old LeWitt catalog that I couldn’t have resist.  Tauba Auerbach’s Diagonal Press had killer posters I couldn’t resist.  I bought a found photo, actually a cyanotype at Ampersand Gallery of Portland, OR. 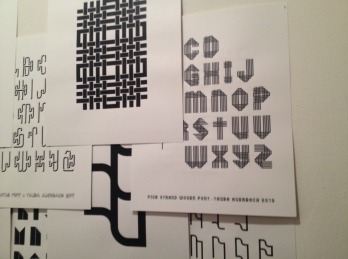 I wish I could have bought more artist books.  What I didn’t buy:  Dan Walsh had several beautiful recent artists books I would have loved to own.  There were enough Ed Ruscha books to start various small fires (couldn’t help myself).  I would have liked the $1,800 76-book ABCED box set at ABC (Ruscha homage central), but I will have to settle with my book about the books.  There were several Allen Ruppersberg books I would have liked, but I think the thing I was most intrigued by was the pop up shop Paper Cuts by David Kennedy Cutler and Sara Greenberger Rafferty.  With work by Cutler, Rafferty, Kate Shepherd, Rachel Foullon and Ruby Sky Stiler I felt like I was in a real artist run pop up shop.

Robert Ryman has what I believe to be an exquisite show up now (Ryman shows at Pace Gallery and for professional reasons, I leave Pace shows out of Atlas).  I am not reviewing Ryman, but recommending it.  I can say that it is possibly the best version of minimalism I have seen.  You have exactly a month to see it.  I recommend you do.