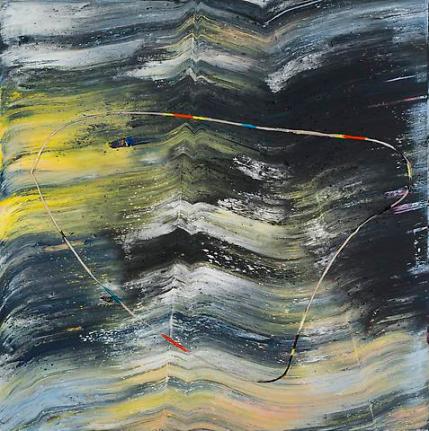 This week is a surface week, it just happened that way.  The artists I want to highlight don’t need my help.  One of them is still with us and two are not.  They all have good galleries and good reputations.  Jack Whitten at Alexander Gray Associates is up until October 13, Alan Shields at Paula Cooper (new space on 10th) is only open until Saturday Oct 6 and John McCracken at Zwirner (on 20th St) is open until October 19th.

Jack Whitten’s surfaces are manipulated.  They are fooled into existence by the molecular structure of acrylic paint.  They are coaxed into discs, cakes, strings and nipples swimming in a sea of color.  The goop and gloss, the furrows and tiny Masadas, the Jujubes and finish-line ribbons of paint are all evident in shape and mysterious in their physics.  Whitten studied his material and you get the sense that his mad scientist paint skills could put Richter to shame.  Thanks to interviews and articles I can now see how Whitten makes what he makes so listen up; you can too.   I often credit Tyler Green’s Modern Art Notes podcast on Atlas, but Whitten’s interview is a must listen for painters and people who claim to understand painting.  The fact is you don’t understand it like he does.

Whitten as a man is incredibly interesting, but that’s not my story.  My story is what I see on the walls.   I see process, I see form and I see color.  Warped Circle (for Alan Shields), 2013 is an homage that takes a line from Shield’s playbook (and is shown in detail on the cover of the catalog).  The blue, yellow and white “developed” surface (Whitten’s term) is thick with deep scars that form a wave, more like a weak EKG than a rolling ocean.  A line lays warped on the surface, changing color like childrens Playdoh being wrung out of a press.  The line is Shields and it sits simply and harmoniously in Whitten’s once worked over space.  Imagine just the outline of a colorful hot air balloon, its interior wiped away, falling to earth in a dusky sky. 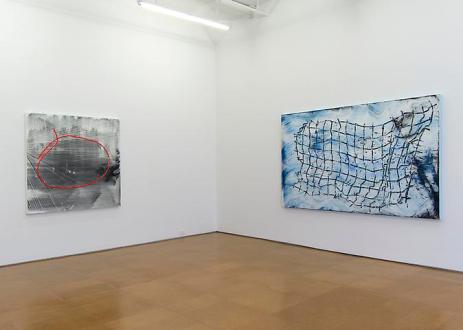 Crushed Grid, 2013 could also be a reference or homage to Shields.  Its space and color are open and bright.  Blues and blacks smear left to right and a grid (that speaks directly to a piece by Shields at Paula Cooper) reveals bright pops of yellow.  Whitten spends time in Greece, and this could be his empty net being cast for that days catch in the bluest sea.  Remote Control looks just like it sounds, long, black, shiny and covered in circular blobs and rectangular bumps.   I could go on describing each, but what I realized is that they must be seen to be believed.  The thing-ness of these is undeniable.  Make sure you don’t miss your opportunity.  The Rose at Brandeis University has a show of his work from the 70’s up now and the Aldrich will have one in 2014.

Paula Cooper has an Alan Shields show at a new (possibly temporary) space on 10th Ave.  Most of the people I know have liked it.  I am not sure how I feel about it.  Alan Shields is a good artist in so many respects and he played with material, he rebuilt the plane, he layered and strung and tore and stretched the frame.  There are flat pieces, but also dangling nets, standing rod sculptures, criss-crossing colored tarp material and mini-pyramids.  These are all things I like.  Still, I feel at a distance from these pieces.  Something in the kitschy colors, the loose constructions and oddball materials keeps me from getting all the way there.  The best I can describe it is hearing music by someone 100 times and knowing you should like it.  Your friend who likes what you like loves that music and even the musicians you love like it and still, it isn’t ever what you want.  For me Alan Shields is Pink Floyd less the production value. 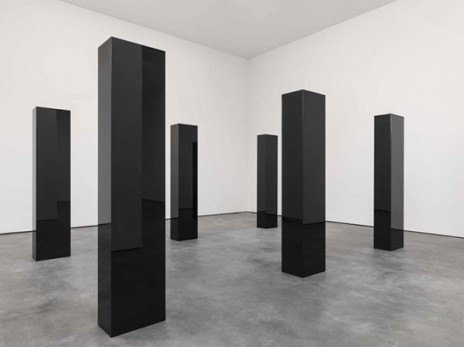 John McCracken does something much different than either Whitten or Shields.  His work embodies the word smooth.  He is Lou Reed with Pink Floyd’s production.  Place him in whatever context you want, he is a masterful colorist, a dominant sculptor, and a knowledgeable and humorous draftsman.   His monoliths, columns or planks are grand.  We may not look like the apes in Kubrick’s 2001, but the art viewing public are just that in the presence of these objects.  The overwhelming presence of these things as shimmering forms is alluring.  They beg you to look and beacon you to touch.  They shimmer, gleam and reflect.

Many have written better about McCracken than I will, so I will save the platitudes and try and give you a sense of these things.  In one room on the second floor, there are 11 pieces on pedestals in various shapes and sizes.  Few are larger than a breadbox and most are boxes but there are a some odd pyramids in the bunch.  At either end of the room is a panel hung on the wall, red to the West and blue to the East.  It is a genius installation.  This room functions as a garden of sculpture you can walk through and around and when you look east or west you can construct your own sculptures with your eye.  I lined up my eye to a lavender box and put the red panel right on top of it.  Perfect.  From the other end of the room I stacked the blue rectangle on top of a green cube.  Choose your own adventure. 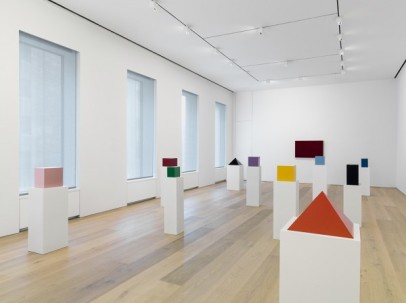 Just outside this gallery is a series of sketchbook illustrations that show off McCracken’s humor and variety.  His sketches of nautical flags are earnest.  His notes were great for scholarship, but also for a chuckle.  My favorite, which seemed to be a drawing intended for public consumption, had beautifully formed block letters that read FUCK YOU (and in small cursive “…is an attempt at saying”) I LOVE YOU and several large blocky horizontal forms.  He elaborates below in his english-teachers cursive that his practice may have been about form, or about color, or maybe both or neither.  He is playing a game, a game I am happy to watch play out.  Its all an attempt at saying what I see, but fuck what I have to say about it; it will speak for itself. 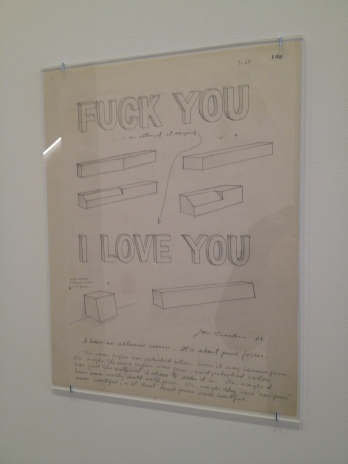