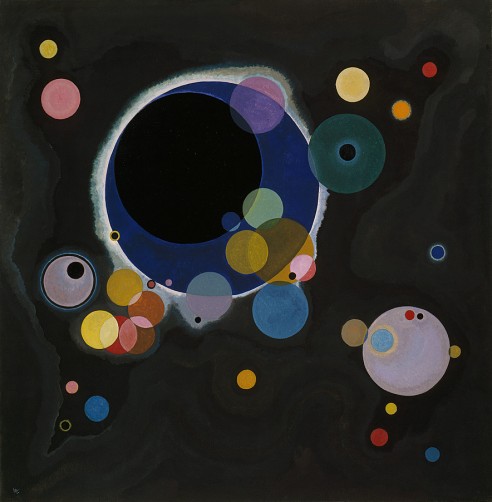 Wassily Kandinsky has been the reason for Atlas since the beginning.  If not directly then historically.  Kandinsky’s images first, and words later, became the reason I wrote and the reason I studied.  Atlas has been my way of exorcising the demons of my past writing failures, especially as it concerned Kandinsky.  So rather than a New Year resolution or a Top 10 list, I am sharing my thoughts, old and new.  The part of my college thesis I have always been most comfortable with was my description of Kandinsky’s Several Circles, 1926.  My professors were good-hearted and patient people who saw that I lacked focus but not passion.  This Atlas, and every word I have written since I began it is dedicated to these educators.  Sura Levine, Christoph Cox and Karen Koehler were the 3 that patiently sat through this process all those years ago.  Thank you.

Today I offer you two passages: Several Circles, Now and Then.  I am writing “Now” before rereading and retyping “Then” (my 15 year old thesis).  Thanks to any and all that stick with me.

I have seen Several Circles many times over the years, but the first is lost to me.  I know I was visiting the Guggenheim during the mid-90’s as a High School student.  I had certainly seen Wassily Kandinsky before at MoMA or the Met, but the Guggenheim (under Hilla Rebay) amassed a monumental collection of his work primarily focused on his Bauhaus years.  At this point I would have been unaware of all this.

My limited knowledge of Kandinsky did not stop this painting from ringing my bell.  I was drawn in by its orbiting planets and force field radiation.  My personal sense of order and beauty sensed harmony in this dark square painting dominated by a primarily black circular void.  The halo, or possibly internal volume of this void, is a rich cerulean blue.  A black hole-like gravity seems to draw other circles in.

The forty or so objects in the orbit of this main circular void occasionally overlap.  The resulting color combinations reveal opacity and imagined light.  There is logic to some of these color combinations, but others seem to reveal color dominance where it shouldn’t exist.  Yellows eclipse red and rusty browns combine to make fleshy pale pinks.  In two places a small black or blue circle inside of a mauve circle mimics fertilized eggs.  Among all these planets, these eggs, or Kubrick’s Dave and his dyed pupil blasting through the infinite in 2001; a relative calm prevails.  Things seem in harmony, hung in orbit and well ordered.

I still don’t know what it is about Kandinsky that lands him in dorm rooms and waiting rooms, but I imagine this sense of harmony I felt resonates with others.  Maybe twenty years on I have let some of the mystical wonder go but his image, Several Circles, remains a constant part of my orbit from then until now.

Then (December 2000), without edits or editorial comments:

“The base of the painting Several Circles has a flowing organic look and changes throughout in shading.  The combination of perfect circles and imperfect “auras” and background exemplify Kandinsky’s notion of synthesis.

The base of the picture plane is black with some slight gray areas.  The area of gray and black is separated by organic lines.  The painting is this base color and circles of color are floating in the space.  These circles intersect and overlap throughout the work.  Many analogies can be drawn between the painting and any number of natural phenomenon.  One might see a biological structure to the painting, which is not unlikely.  Throughout Point and Line to Plane (2015 note: Point and Line to Plane is Kandinsky’s thesis on Abstraction written for Bauhaus instruction in 1926, the same year as Several Circles), Kandinsky displays images of nature and science, such as a petri dish.  The colors of the circles are bright and bring to mind several natural occurrences including lights in the night sky.

Jelena Hahl-Koch refers to this painting and several others that focus on the circle in her Kandinsky.  The author cites a letter by Kandinsky to (Gabrielle) Munter that notes the hiring of an astronomer to teach lessons to Kandinsky on a nightly basis.   Several Circles has an unmistakable similarity to a starry sky.  The similarities are not so important in this reading of the work, rather what the reader can glean from the structure.

The circles are the obvious focus of the painting.  Approximately forty-five circles in a variety of sizes and colors fill the plane.  To the left and towards the top of the frame, is a large blue circle with a white halo.  This circle has a black circle placed entirely inside of it, and several smaller circles overlapping it’s edges.  It appears that most of the circles have moved closer into the large blue circle, as though it were a tunnel or black hole.  A variety of colors overlap and blend, as though each luminous circle were a lens of color, being lit by an unseen source.”